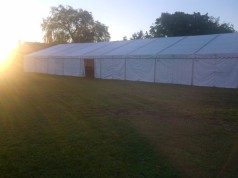 We’re already talked quite a bit on here about the Chudleigh Literary Festival, which is coming up on Wednesday 10th July. Today, we thought we’d say a bit about the rest of the Summer Spectacular and how come we have a huge marquee in the middle of town every July. (But in case you’ve missed the Literary Festival details, there’s a quick recap at the bottom of this post.)

For nigh on 100 years, give or take, July in Chudleigh has been about Carnival. It’s a week of fun, with major events such as the 6 mile road race on Friday night; the fun run on Sunday night; and of course, the main attraction: the parade on Saturday evening. It’s a week that many people in town look forward to, and the main events bring hundreds of people out on the street.

But it requires a huge amount of work by the stalwarts on the Carnival Committee to get it up and running. And back in 2011, there was a bit of a hiccup; and it was decided there would be no Carnival that year.

As an alternative, a group of us arranged for a huge marquee to be erected on the town’s Play Park, offering the various organisations the opportunity to put on their own events during the week. And thus, Chudfest week was born.

Since then, Carnival has returned to the town, and the two weeks now run one after another, giving us a two-week Summer Spectacular.

Over the two weeks, we have dancing, both to live music and discos; comedy; quizzes; bingo; treasure hunts; an old-fashioned village fete; and the previously mentioned races and the parade. Plus, of course, the Literary Festival. And additionally, for the second year running, the members of Chudleigh Writers’ Circle will be joining with Newton Abbot Photographic Group to stage Duets in Words and Pictures. Last time, the photographers provided pictures to which the writers provided words. This year, we’ve reversed the process. The results will be on show in the My World, Your World, Our World exhibition running in the Church throughout the Chudfest week.

And as a reminder of what we have in store during the Literary Festival itself: Professor Todd Gray will be delivering a workshop on writing historic fiction and non-fiction in the morning; aspiring novelists will be pitching their work to a panel of industry experts in the afternoon; and our guest speakers in the evening will be Wilfred Emmanuel-Jones aka The Black Farmer; and historical novelist, Michael Jecks. You can get all the details and download your booking form by clicking here.