Medieval Murder and Jeopardy In The Chudfest Marquee 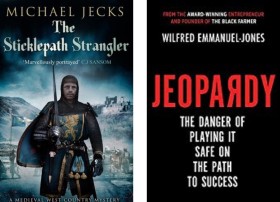 In the third and final part of our report on the ninth Chudleigh Literary Festival, held on 10th July in the Chudfest Marquee, CWC member, Maureen Williams takes us back to a thrilling and inspiring evening featuring medieval murder and jeopardy.

“First, Michael Jecks talked about how he became a medieval thriller writer, after losing his job due to redundancy. He is a prolific writer and since 1995 has written over 50 books. Using a quote from Kipling’s Six Honest Men whose names were: ‘What and Why and When and How and Where and Who’, Michael took us through the stages of writing a new novel.

He told us how early in his writing career, he decided to base one particular medieval novel around Widecombe Fair. So, he went to the British Library to investigate and made numerous enquiries. He eventually discovered that the fair started in 1850, so consequently he had to find another venue for his story.

Michael answered many questions from the audience including one asking him who his favourite character was from his writings. He said it was Jack Blackjack, the bungling assassin, who made him laugh! If you would like to read Jack’s latest adventure, The Dead Don’t Wait, the hardback is out now, and the ebook will be released in September.

The second speaker was Wilfred Emmanuel-Jones, the founder of The Black Farmer range of food products. Wilfred is an amazing, inspirational speaker who told us about his life, his career in television, marketing, farming and producing his food products. He came to Birmingham in 1961 from Jamaica as a small child with his parents and eight siblings. They lived in a two-bedroom terraced house in Small Heath. Wilfred’s escape was to go to his father’s allotment where he dreamed of one day, buying a farm.

He started his career working as a chef in fast food outlets and managed by persistence to get a job as a runner at the BBC and later rose to working on the Food and Drink programme as a producer and director. He was responsible for introducing Gordon Ramsay, Antony Worrall-Thompson, Brian Turner and James Martin. He set up a marketing agency specialising in food brands, including Lloyd Grossman sauces, Kettle Chips and Plymouth Gin.

Finally, Wilfred bought his farm in Devon and developed his Black Farmer food brand. Since then he has had a year-long battle with leukaemia but is now back to health. He talked about how our natural instinct for caution can create barriers to making progress and explained that his parents demonstrated embracing jeopardy, by making the decision to leave Jamaica and come to the UK in 1961. He himself has actively used this approach throughout his life and become successful in many different careers.

In his book Jeopardy: The Danger of Playing It Safe on the Path to Success, Wilfred draws on his own life and career to help readers improve their own prospects and develop their full potential.”