Last week we heard from Steve Male about his Swanwick 2019 highlights. This week, it’s the turn of Bea Hutchings to take up the story, although one incident in particular is common to both accounts. 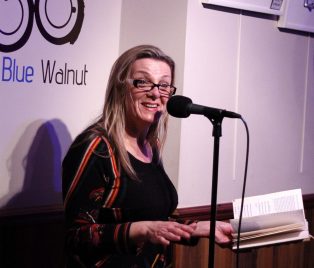 “I’m focusing the blog this year on some of the evening events in the Main Hall, including, once again, the fire alarm:

It was a cold and windy…no wrong place. It was a warm and pleasant night; some people had retired to their beds after their long journeys and a busy day; I had gone to bed and was just dropping off when…; others were drinking in the bar and having a sing song, when…suddenly, it was like the bells of fury had collaborated against revellers, sandmen, and snoring in one fell swoop. Let’s just say the alarm was deafening. I felt like a gong, whacked with a very large mallet. Outside in the corridor, bleary-eyed, with my nerve fibres vibrating like a guitar string, I met the lady from the room next to me. Funnily enough, she had a guitar strapped to her back!

I’m certain I remember music and singsongs in the main hall, which also doubled up as our fire assembly point, and of course evening entertainment venue. So, as I’m talking about music let me take you first, to Tuesday’s Buskers Night:

‘Walter, Walter, take me to the altar…’ as originally sung by the wonderful Gracie Fields, wartime sweetheart, wife and mother, was sung with gusto amid cheers and laughter by a regular lady Swanwicker. Mark Iveson, musician and organiser, has been hosting this event for the past nine years. He was unintentionally funny with his unique, ‘get off, you’ve had too long,’ manner, which made the evening even more hilarious. There was a fabulous mix of talented performers who took to the stage, giving the audience the opportunity to join in with some of the songs or just sit back and enjoy.

Jumping back again to Saturday night, our first speaker was the brilliant Paul Dodgson who apparently once tried to persuade Boris Johnson that comedy would be a better line of work than politics…

It was an excellent talk by Paul, whose experience as BBC radio producer in television, drama, documentaries, musicals, theatre plays, the list goes on…was both entertaining and encouraging for everyone. His new book, On The Road Not Taken is an insight to his work, and gives a peek at the man inside with the beautiful, poetic style of his written words. I highly recommend it.

On Sunday, Hope Adams was guest speaker, a much-published children’s book author, who also happens to be Sophie Hannah’s mum. Hope Adams is a pseudonym she created because she had a lot of Hope, and the surname Adams begins with the first letter of the alphabet. Another great evening ‘s entertainment as Hope talked about her books and writing experiences.

Monday was the ‘In Conversation With…’ evening, which is a chat show. Host, journalist and author Simon Hall, interrogated interviewed guests; crime writers, Amit Dhand and Sophie Hannah, and poet, Alison Chisholm. They were all great sports, and answered questions with a sense of fun and enjoyment, and great embarrassment. (Not mentioning any names but A D had us all in stitches with some of his answers). The evening was another huge tick for the Swanwick Committee, who work incredibly hard putting the programme together.

Tuesday, was the turn of Devonian John Townsend, full-time children’s author, who literally brought the house down with the comedic telling of his career to date. His presentation was so funny, it will stick in my memory for a very long time.

Wednesday, we had Magic and Science, a night of illusion, magic tricks and audience participation, presented by Dr Fabio Tartarini, who cast magical ideas for writers, through psychology and communication. It inspired me! Now, where did I put my wand?

But the night wasn’t over; after this event we had Page to Stage performances, a selection of five-minute rehearsed readings written by Swanwick delegates. The audience had voting forms and we voted for specific categories of the performances. Whether serious or humorous, they all deserved a prize, they were all so good!

And then, before we knew it, THURSDAY! The last evening at Swanwick! Winners were presented with their awards, including our very own Elizabeth Ducie, who won the Chairman’s Prize for hunting down and solving twenty literary clues distributed throughout the house and grounds. At one point, someone won an onion but it wasn’t collected, so it might be there again next year. Farewells were said, and the Swanwick song was sung.

I haven’t included everything here, there were so many other brilliant events. All I can say is: ‘seeing is believing’. I can’t wait until next year.”