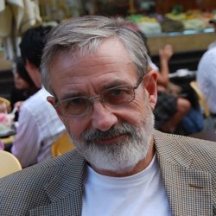 The second Exeter Literary Festival took place from 7th to 10th November in a variety of venues across the city. Over the next couple of weeks, we will bring you reports on some of the events. Today, Steve Male talks about an intriguingly-titled session featuring members of Chudleigh Writers’ Circle.

The Lawyer And The Chemist Turn To Crime

“We gathered at Exeter Library to hear our fellow CWC members present their take on writing and publishing. It was not a pleasant day with cold winds and rain outside and not much warmer in the meeting room, but a good-sized audience battled the elements and assembled for the talk. 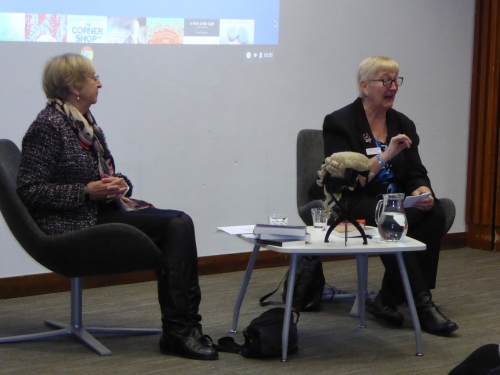 The format was a chat between our own Margaret Barnes and Elizabeth Ducie (aka Kate McCormick). Margaret had her wig from her former life as a barrister, not on, but displayed on a mannequin head on a table.

Todd Gray introduced the session, making all the usual announcements, and we were quickly into the talk. Initially they both reviewed their back catalogues and current books which were handily available for purchase in the room. They then described their backgrounds and how they made the journey from highly successful professionals, Margaret in the Law and Elizabeth in the Pharmaceutical Industry, to writing and publishing.

Interestingly they both did the Creative Writing MA at Exeter University and both recommended it to deepen knowledge and bring a structure to their writing. They both agreed on the value of writing retreats as a means of focusing on writing without all the day-to-day interruptions life inevitably brings

They work together as Writing Buddies, meeting weekly to critique their work and encourage each other. The ability to talk to someone about your work who won’t be always as reassuring as a family member might be, but always supportive, was a big plus to engaging with another writer in a writing buddy relationship.

Interestingly both Margaret and Elizabeth have taken a different path to publication.

Elizabeth is, and always has been, an avowed self-publisher and talks highly of the process and the benefits of this route to market. From her experiences of self-publishing she has written a series of books on the business side of self-publishing which will be a great help to those thinking of embarking on this approach. She primarily uses Amazon for ebooks but a local printer for her paperbacks. She emphasised the ability to control the whole process and the lack of being told what to do. She is very pleased she took the self-publishing route and emphasised the benefits as a positive choice and not just a last resort.

Margaret initially went the conventional publisher route and despite being accepted by her editor the publisher didn’t proceed to publication due to marketing reasons. They had another book from a more famous author in the pipeline and they wanted to concentrate on that. Margaret then tried a halfway house of having a package of services supplied by another organisation but was disappointed at the results. She then regained the publishing rights to her books and now uses Amazon as Elizabeth does. It works very well and she too likes the full control of the process. She has republished her previous books and her new one on Amazon and her sales are much better and improving from month to month.

They both agreed a good story well written does not guarantee success. Good writing is not necessarily published by conventional publishers. There are many other factors, most of which are outside your control.

Elizabeth and Margaret were both very happy to be able to control the pricing of their books. Another big factor for them was as a Kindle ebook the lower prices, due to no printing or paper, means readers are more likely to give authors new to them a go. Whereas a hardback at £15 is a bigger decision and often means the more established writers tend to be preferred on ‘the devil you know’ principle.

Despite the advantages of self-publishing, both agreed it is vital that some services are bought in even if you are going the Independent Publishing, DIY, route. Margaret and Elizabeth stressed the benefits and importance of hiring a good copy editor to go through the manuscript once it is in the state they are happy with. Also, they agreed on the need for a professional cover designer. Graphic art is not necessarily a competence of every author and the cover is vitally important as the primary “face” of a new book. People do indeed judge a book by its cover.

The whole session went by very quickly and before I knew it, it was coffee time.

Margaret and Elizabeth gave an insightful look at the issues for any writer getting their work published and they received a strong round of applause as a vote of thanks from an audience newly motivated, or re-motivated, to self-publish.”