The Nuts and Bolts of Creativity

Back in January, Paul K Joyce was one of the members of CWC who shared with us his writerly objectives for 2020. This week, we hear how he’s getting on.

“My blog is about the nuts and bolts of creativity. That is to say, the process by which we manage to get our innermost thoughts and ideas down into something resembling a cogent and readable output. Wow, that was a bit verbose!

You may remember that I had hoped to self-publish my Brexit-themed YA novel by the end of January. I had done my homework and I was ready. My Amazon/Kindle account was up and running; I had commissioned a book cover using a professional designer; and lastly, and arguably most importantly, had engaged The Literary Consultancy to assess the manuscript. This was where I came unstuck.

I had hoped for a ‘clean bill of health’ and so was disappointed to receive a report that was more critical than expected. The reader/literary consultant who commented on my novel is a published author and I respect her assessment. So when she advised further work on character motivation and development I took her observations seriously. I put the brakes on the publication date and have tried to gain some distance from my characters, to reassess them and understand them better. As you know it’s never easy for any creative person to receive criticism. It’s equally hard to act on it.

A lifetime as a jobbing composer may have prepared me for this development. Directors would occasionally say to me (after I’d submitted a carefully prepared piece of music): ‘I don’t know exactly what I want, but I do know that I don’t like what you’ve done.’ It was as maddening as it sounds. It did mean, however, that I had to be able to begin again and approach the project differently. I once reworked a theme song twelve times. 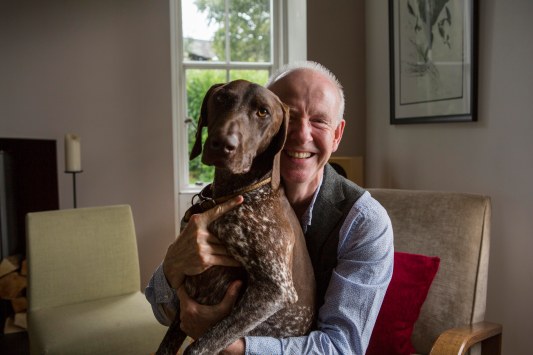 Paul, with his muse, Murphy

Returning to writing, the comments of my reader/literary consultant began to sink in and I’ve had some wonderful epiphanies since first reading the report. These have happened in quiet moments—first thing in the morning with the fire just lit and the dog curled up at my feet. Peaceful and phone-free. For me, it is these moments with little or no sound when suddenly it arrives—the germ of an idea. An idea that dispels doubts and hesitations and means you’re back up and running, filled with enthusiasm and positivity. I’m in a good place now and ready to face the challenges of writing new story arcs and more believable characters and their subsequent development throughout the novel. I hope to publish in April.

At a writing festival last year, I met a group of like-minded people and we’ve kept in touch, offering support and tips to each other. One such recommendation was to try a piece of software called ProWritingAid. I was extremely wary of this approach to editing but thought I would give it a go. I must say, it has been invaluable.

Approaching my MS dispassionately (well it is a machine), it pointed out so many things that I had failed to spot: spelling mistakes, repeated use of she at the beginning of consecutive sentences, too many adverbs, and suggestions for reworking grammar. Having submitted work for scrutiny by literary consultants on many occasions, these are the very same issues that they flag up. Of course, the software doesn’t get to the heart of a novel and to assess feel and originality, but I really enjoyed the way it challenged me to reassess every sentence. I bought the software.

2 responses to “The Nuts and Bolts of Creativity”